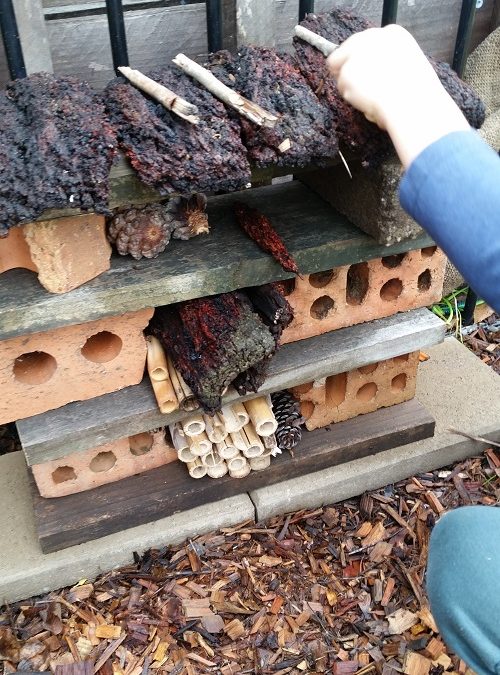 Attracting more insect pollinators & pest eaters to the vegetable garden by including a Bug Hotel is very popular.  At the end of last summer, I let the pumpkin vines take over my vegetable plot. Then mid winter I went on an overseas holiday leaving what was left of the garden to take care of itself. Now it is spring… time to clean out the weeds, shovel in the compost and start planting again. Adding a Bug Hotel should bring free helpers in to get the garden producing.

The children, who visit my garden, love to use real tools & help build things. There are lots of fancy Bug Hotels you can buy at the shop or online but it would be more fun to make our own & learn about the insects that may eventually move in. So I checked out some pictures on the internet and together with the children, we made a list of materials we thought would be useful.

We started with what we had & created the first level.

It was so disappointing when it fell down a couple of days later but we learned a valuable lesson. I had another think about it & chose a better location…..not against the fence the dog jumps up on. While I wanted to use materials we could find for free, I did purchase a couple of pavers to site the new Bug Hotel on to make sure it had a really sturdy base…..we wanted to build a few levels up.

The children were excited to help with the tools. Mr W held the bamboo left over from last year’s bean trellis while Mr H used the saw to cut it into smaller lengths. This didn’t take too long but sawing through the planks from the pallet I pulled apart took some determination from Mr W. Miss A was enthusiastic to have a go but needed a little assistance with the saw. 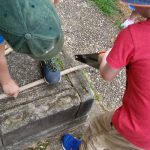 Mr W holds the bamboo for Mr H to saw 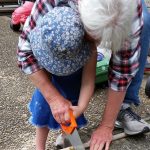 Miss A needed some help to use the saw

We then worked together to build the first few levels of our new Bug Hotel. To stop the bamboo canes that the boys cut up rolling all around, they put them into the middle of a cut down milk bottle. This would make a really simple Bug Hotel by itself. If you don’t have any bamboo, fill up the plastic milk bottle surround with different thickness sticks. These simple Bug Hotels work well if you hang them from a tree. 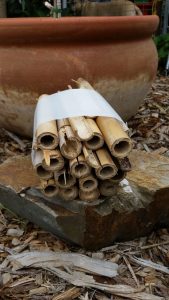 It has been a few weeks now & version 2 of our Bug Hotel is still standing. Time to add a few more levels I think.