Slowly the Phoenix will rise in Berambing from the fires, come along and see it happen

The Phoenix will rise from the ashes, we all know that it will, but the heartache is the time between.

All Australians know this story only too well.

Brontee Bee knows it as well. We all feel our concern and aching inside with anxiety, menacing debt and anger.

We all ask what we can do and many are doing their bit, but for the ones who have not figured out what they are powerful to do travel with us to get some ideas.

Brontee Bee will bee in 2020 your eyes to the Phoenix in all of us.

We will be travelling as far as our budget can take us, to areas of these climate extremes to visit with our Australian everyday heroes to check in and record their stories of the Phoenix rising from the ashes.

With the greatest of respect Brontee Bee will speak with the every day person who somehow became heroes and helped others in their way.

We start with the journey of speaking about a nice quiet man who decided that he could start over and buy a business in a small community which he felt the right thing to do for he and his family. The journey began when he took on the business in the early start of December 2019. Excited and confident to make it work.

We roll on in time to approximately two weeks and it is mid December and this gentle man was facing his whole world and business house and mortgage, going to be swallowed by the Gospers Mountain Fires.

Two weeks ago, there was a huge excitement, now it is a huge pit of raw nerves.

The area was locked down by Police, RFS and Volunteers, everyone had huge lists for every second of their day. This nice quiet man was new to the area and only had his family and his business but as the roads in front of his service station were closed, he could see his livelihood not being there in the near future.

He was worried but he could speak of it to anyone, he just knew that he cared about the area he had just come to and the people who needed some help.

The locals all knew this feeling too, so even though it sounded strange,when they needing the odd milk, can or drink went to this new locals service station. His gratitude was eminence. When the fire fighters needed to refuel they went to this local, when the SES needed fuel for their chain saws they went to the local ,when no one else could reach his business the locals went. Even in this stressful time they all shared, making the local service station owner realise he had made the right decision in coming to Berambing.

When the fires beat their way to the his doorstep his new local community stood to defend his new business, in which he placed every penny and believed he had made a good investment. 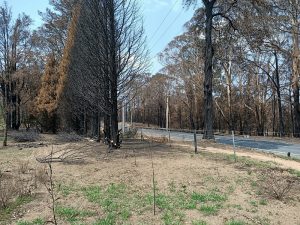 Berambing next to the service station

Berambing straight across the road from the service station

So I encourage you to look at these photos I have taken of the quiet kind man’s business which was surrounded by the fires at Berambing. Discover like we did, talking to the people, the heroes and visit them to bring back to them the gratitude of their larger community and the strength of local help. Drive that little bit further to fill your tank at the Metro. 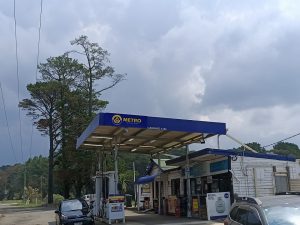 We will again travel soon to the areas of need and speak to the people who are not the big flashy businesses but the strong quiet kind people who said NO to the fires, which wanted to destroy them and see them Slowly Rise Like the Phoenix.