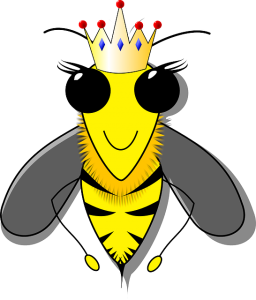 Brontee Bee felt extremely proud that she had been picked to look after Queen Karlene. The nursery staff had already given Brontee the best information of the Queens favourite nectar. This was brought to Brontee Bee by her friend Fran who was one of the foraging bees who gathered the nectar for the hive fresh each day.

Todays harvest for the Queen is from a garden with beeautiful onion flower pollen. This is sweet and rich with strong tasting syrup, and it gives energy which lasts for a while within Queen Karlene’s abdomen. Fran said when she was there in the garden the pollen was also being harvested by native stingless bees near-by. But of course, my friend could not speak with them as they talk a special Bee Strine which only Brontee Bee could understand.

The strength which the syrup gives the Queen is important as she is busy laying eggs in the Brood Chambers of the hive.
After Brontee feeds Queen Karlene, through her hypo pharyngeal gland Brontee moves around the Brood area emitting a pheromone which is called “Queen Mandibular Pheromone” the closeness of this being with the Queen brushing up against her in grooming transfers the pheromone. This pheromone tells the rest of the hive that their Queen is healthy, and the hive brood eggs are fertile.

Whilst Brontee is grooming the Queen, the Queen is advising Brontee about the special gift given to her.

“Having long life comes with great responsibilities” Queen Karlene said
Feeling honoured with this task Brontee felt she should ask more questions to make sure that this honour was not wasted, “Dear Queen, what do I do to make sure all Bee’s understand the messages of working together?”

“I need you to speak to different hives near and far afield after you are stronger. I will send you on journeys, to enlist help from other fauna. Get them to understand too if we die or continue to be sent overseas to die they will die and so will humans because we will not be here to pollenate the food supplies.”

Brontee went a little quiet, this was a very big task for a very small bee, but her Queen had asked her, and gave her extra long life so she must do this for all, no matter how long it will take it was too important to ignore.